Department of IR is organizing a webinar titled as “Revitalization of Two Nation Theory from perspective of Indian illegally occupied Jammu and Kashmir" on 6th January 2021 i.e. Wednesday

Important Note: Pictures of VC and HOD are already with you. Pictures of Guest Speaker and Moderator are on next page.

The creation of Pakistan was based on the Two-Nation Theory — a premise which suggested that the Hindus and Muslims of India were two separate nations which needed their own geopolitical territories so that they could govern their lives according to their distinct religious teachings and practices. The founder of Pakistan Muhammad Ali Jinnah during his presidential address as the leader of the All-India Muslim League on March 22-23, 1940, said, “The Hindus and Muslims belong to two different religious philosophies, social customs, literature. They neither intermarry nor intertwine together and, indeed, they belong to two different civilisations which are based mainly on conflicting ideas and conceptions”.

Since the creation of Pakistan, the Two-Nation Theory, however, has been widely criticised by many detractors who have claimed that it lost its validity in 1971 when Pakistan and Bangladesh parted ways with each other. Two Nation Theory came in limelight again On August 5 and 6, when the Indian government fuelled Hindu nationalism by abolishing Article 370 of the Indian Constitution which preserved the special autonomous status of Jammu and Kashmir. India which was once hailed as a secular state is fast being engulfed by the dominant Hindutva ideology which states that India is the homeland of the Hindus alone. These changing dynamics of India engulfed by Hindutva Ideology is posing a threat to the region. This Webinar will discuss the theme as described below: 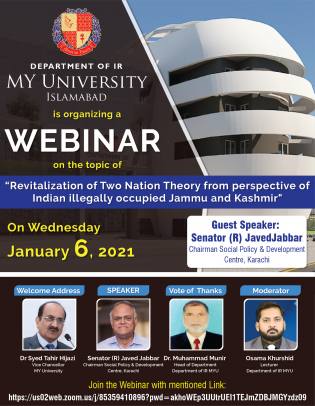